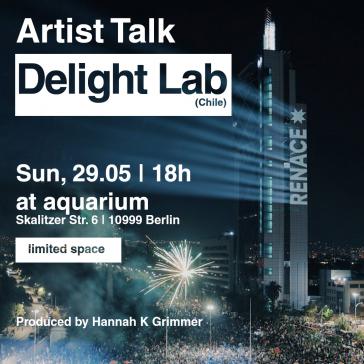 The Chilean art and design studio Delight Lab by the siblings Andrea and Octavio Gana, which already exists since 2009, has made it its mission to publicly denounce the country’s injustices in moments and areas of conflict, focusing particularly on environmental issues.

When the social revolt began in October 2019, they actively supported it, intensively engaging with the demands on the streets and developing projections from them that could be seen in various places, especially on the Torre Telefónica in Dignity Square.

With Hannah K. Grimmer they talk about their artistic practices, the connection between art and activism and the visibilities they try to create.